5. Encyclopedia Britannica 11th edition, concerning the Talmud says there was a  wide spread 6000th year doctrine among the Jews and the early church.

Due to slight historical discrepancies, look to 2027 to 2032 as his coming, with the peak times to watch for his coming in the years 2028 and 2032. Never did he say we couldn’t know the year or season.
This chronology in a deeper research can be found here 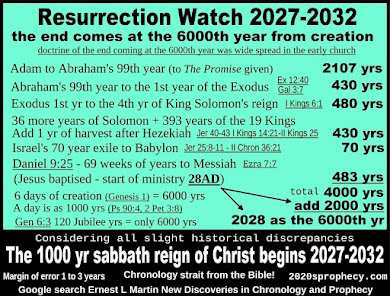 The popular doctrine of "The Imminent Return of Jesus" has been wrong from it's very conception. These evidences point to the 6000th year for his coming. Even if you believe in a pre or mid tribulation rapture, you would look to 7 years or 3.5 years before the 6000th year.
Evidence Backed End Time Prophecy 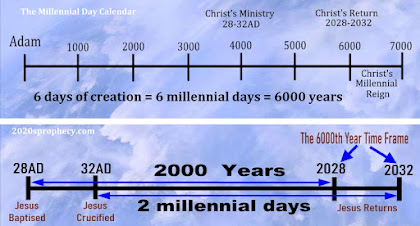 How these modern popular prophecy teachers have over looked this is amazing! There is not a greater prophecy with more backing it than this!
Many scholars are relying on faulty Ptolemy year count, in thinking we are past the 6000th year, including James Ussher. Such faulty data has deceived the 99% of prophecy teachers and they are at a loss with timing to prophecy, which is leading them into trying to find other ways and scenarios in bible prophecy, which is only making matters worse. The confusion is causing many Christians to cast off prophecy, sadly, missing out on the exciting revelations being given on the timing of his coming, more covered at prophecybook.net
at October 14, 2020 1 comment: